One of the nice things about the Abu Dhabi Grand Prix, at the Yas Marina Circuit, is that you can buy tickets which cover a wide range of events.  We got a package that covered the 4 days starting with the Pit Lane Walk which meant we could see the cars up close.

After the Pit Lane Walk we headed for the beer garden for a drink and to enjoy the atmosphere.  We managed to find some food although being late in the day our choices were somewhat limited.  Still there was a really good atmosphere with everyone enjoying themselves.  At some point some of the drivers were signing autographs.

Every evening there is an after race concert starting with Post Malone.  So after eating we headed back to the bus stop to catch a bus to the Du Arena.  We did stopping to get some photos with formula 2 cars.  We got to the Arean there shortly after 6 pm when the gates opened so while the stadium was starting to fill we had to wait till 8 pm for the concert to start.  The first part was a DJ.  I guess we were showing our age because we decided it was way too loud and it was not worth waiting for Post Malone so we left.  Nonetheless the concert was very popular and I’m sure most people would have enjoyed it.

On Friday we decided not to attend the F1 Grand Prix.  It was mostly practice races and we were not very interested in the after race concert.  IT Guy had some work to complete and I wanted to catch up on my sleep.  It turns out this was a good choice because security decided to close the gates early and so there were riots with people pushing and shoving so the gates were reopened.  I gather this kind of behavior in the UAE because the authorities are quick to clamp down on any trouble.

On Saturday we had planned to attend the qualifying race but we ended up watching IT Guy’s cricket team.  Then we headed for Abu Dhabi and it seems like everyone was in the Grand Prix spirit with a lot of fast cars and also crazy drivers with aspirations to drive racing cars.  We arrived in time for some Formula 2 racing.  I found it a nice warm up for the Grand Prix because it was a chance to get an idea of what it would be like watching fast cars go round the Yas Marina Circuit.  We quickly learned that there was a good view of one of the corners which was a good spot for overtaking so it was interesting to see which car would come out of the corner first.

Then we headed for the concert area.  Sam Smith was performing and IT Guy was very keen to watch him live.  I enjoyed the concert but I think IT Guy was a bit disappointed because he did not perform all of his best songs and did a lot of talking.

Overall I enjoyed the Grand Prix concerts and the atmosphere.  Even if you are not interested in watching the F1 racing there is still a lot to do and it can be lots of fun.

One of the nice things about the Grand Prix in Abu Dhabi is that you can buy tickets that cover 4 days of activities starting on the Thursday.  The main activity on Thursday is a Pit Lane Walk.

We were staying in Dubai so we drove to Abu Dhabi in the early afternoon which is about an hour’s drive.  The tickets included parking in car park W.  Typically we only decided to check which car park we were in as we drove past the turn-off for our car park.  Naturally this meant we ended up going the long way round.  We then managed to drive in the bus entrance and had to do a slightly dodgy stunt to park. Clearly we weren’t the only ones because when we returned later they had put extra cones out.

Thursday being relatively quiet there was a long line of buses ready to take passengers so we hopped on the first bus and were soon on our way.  From there it was about a 10-15 min walk to get to the pit lane so by the time we arrived we only had an hour to look at the cars. 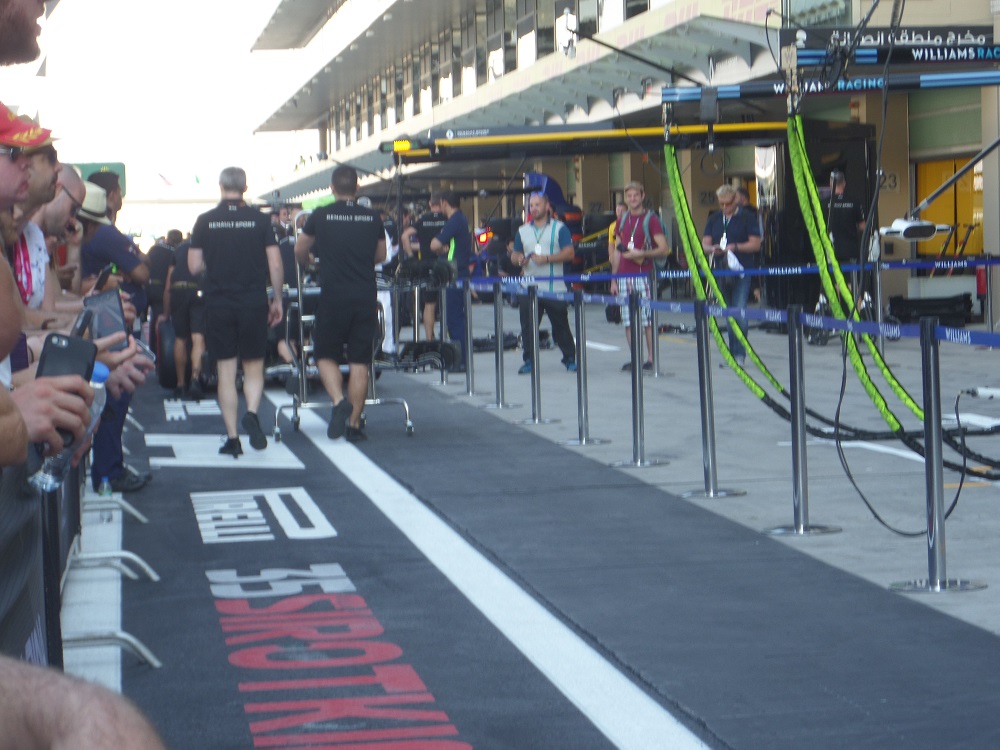 It was great because you could watch the guys working on the cars.  We got really close to the cars and with a good zoom lens it was possible to get detailed picture of the fins.  They are developed by the aerodynamics team to create downforce.  The front wing is really important because it affects the airflow for the rest of the car.

It was very interesting watching the guys getting the cars ready.  When we walked past the Red Bull team they were busy sorting out the suspension on the car.  With most things looking very high tech it was rather amusing to see this process involved a hammer and guys sitting on the car.

Of course one of the most famous teams is Ferrari with the biggest fan base.  So crowds were biggest in this area.

One of the key part of the preparation is to get technical approval of.  Every so often a team would push their cars past us so then we really were very close.  We were so focused on watching the guys working on the cars that I was a bit slow getting a decent photo. 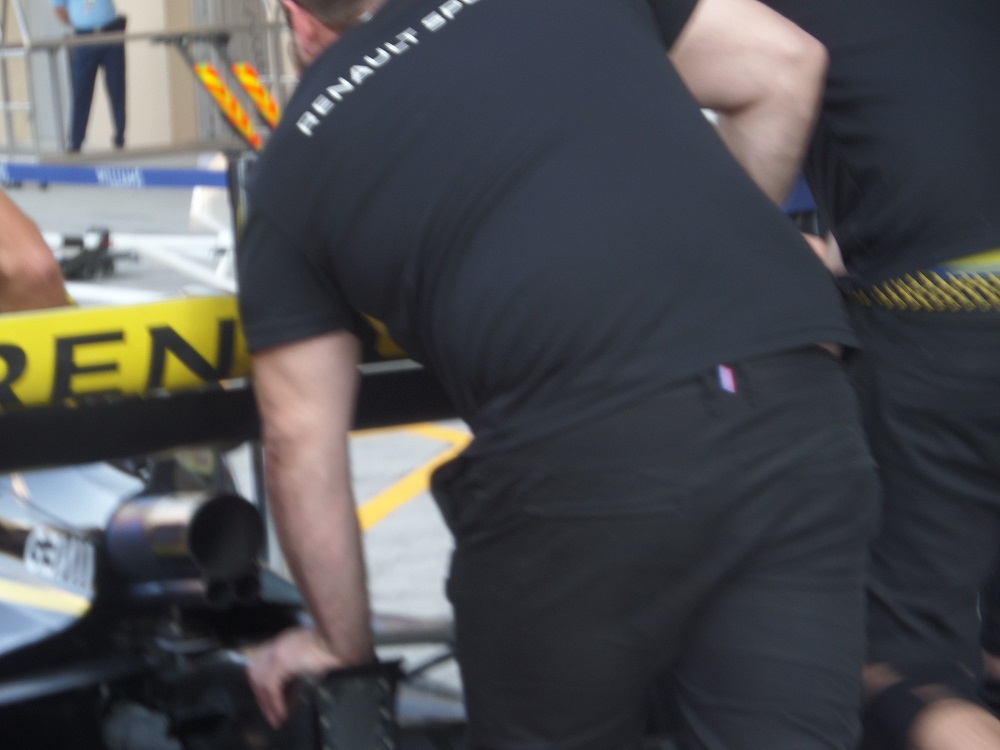 This is the Haas team taking their car for inspection.  Interestingly in the middle of the season the inspection found that leading edges in the middle of the car exceeded requirements by a few millimeters.  This was enough for them to have points deducted.  Fortunately this time it seems they did not have any issues. 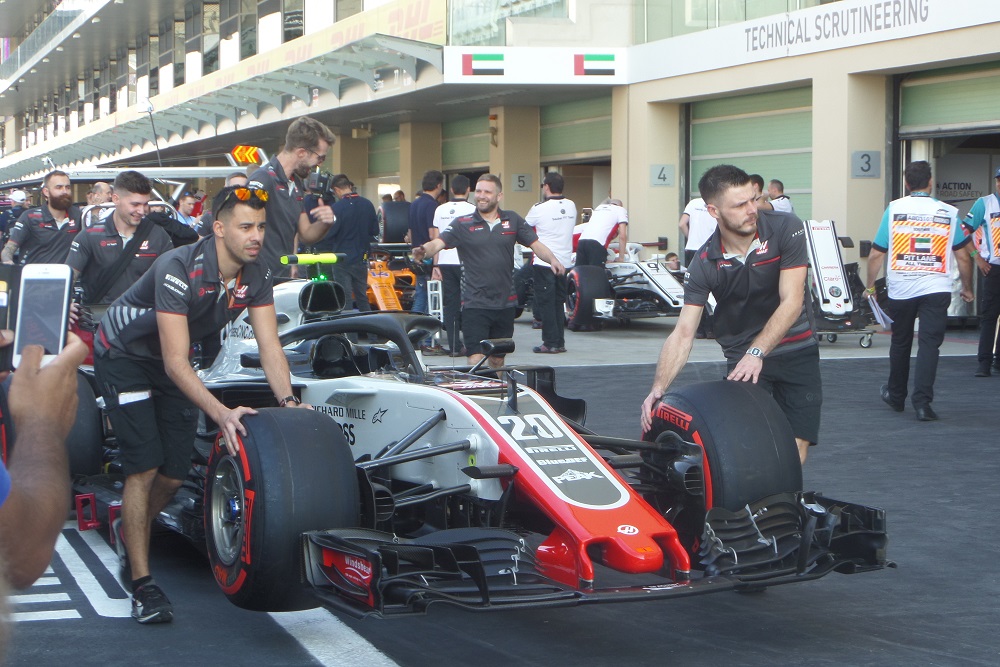 The Williams team were making the most of a brief rest while they waited for the inspection.

I think it really does make things more interesting when you can see a bit of the background activity and see the cars close up.  So I really like the way the Abu Dhabi Grand Prix provides tickets for a Pit Lane Walk